PROFIBUS DP vs PA: What Are the Main Differences?

PROFIBUS continues to lead serial Fieldbus technology, even though it’s been around since 1989. True, the world is gradually shifting to Industrial Ethernet for industrial data communication. Nevertheless, PROFIBUS still has a bright future.

The prevalence and popularity of PROFIBUS in the manufacturing and process industries is due in large part to two features: its ability to fulfil complex automation requirements and its ability to communicate between devices of different manufacturers without the need to adjust interfaces.

There are two variants: PROFIBUS DP and PROFIBUS PA. Of the two, PROFIBUS DP is considered ‘the standard’ simply because it is the one that is most commonly found in industrial applications. However, both kinds use the exact same messaging protocol and can be used for critical applications and intricate communication tasks.

That said, there are key differences, so let’s take a look at them.

How does PROFIBUS DP work?
The DP stands for Decentralised Peripherals. It was developed for various factory and process automation applications and uses the RS-485 as its physical layer, which enables long cabling distances in electrically noisy environments and can support multiple devices on the same bus.

The major features of PROFIBUS DP are high transmission speed and simple data exchange. It can run on baudrates from 9.6kbps to 12Mbps. What’s more, the maximum cable length is inversely proportional to the baudrate. In other words, the higher the baudrate, the shorter the cable.

PROFIBUS DP usually uses bus topologies, where all devices are connected parallel to the cable (see picture below). You can have up to 32 nodes in one segment, but repeaters can be used to extend segments and create other types of topologies. Repeaters can also serve as galvanic isolation between electrical segments to isolate electrical disturbances.

How does PROFBUS PA work?
The PA stands for Process Automation. It was developed for the process automation environment, which often requires slower procedures and can be subject to explosive or hazardous conditions. Here, safety and interoperability are essential.

The physical layer of PROFIBUS PA is Manchester Encoded Bus Powered Intrinsically Safe (MBP-IS), which allows synchronous data transmission. Unlike the DP variant, PROFIBUS PA transmits data and power along the same two wires of the cable. Although the cable characteristics are different, they are still standardised by PI.

The intrinsically safe aspect of this architecture is particularly suitable for devices located in dangerous environments because it limits the power going to the field. This eliminates the need for the traditional containment method used by Modbus.

Another difference with this variant is the signal baudrate. PROFIBUS PA uses 31.25Kbps. These physical and signalling changes facilitate the use of star and other topologies (see picture below). The cable length is determined by the intended safety environment or the Ex Zone (the rated Explosion Hazardous Area). 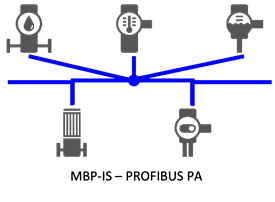 Summary
PROFIBUS DP and PROFIBUS PA both use the same messaging protocol and both are widely used in industrial automation. However, each variant targets different applications. Here’s a handy overview to wrap everything up:

Want to learn more about PROFIBUS and other industrial networks?
Join Procentec’s Academy, where you can develop your skills, increase your confidence and improve your employability. It provides a range of training opportunities for all needs and budgets, from online lessons to in-depth certification courses.