Flexibilization achieved in the port through creative design

Last spring, the port of Rotterdam gained a smart automated oil terminal. A great deal was possible in the design and development of the automation, by combining and merging different systems and products in a smart way.

How fast is oil traded?

For years and years, Rotterdam has been the number one oil port in Europe. Crude oil is transited in enormous quantities, or processed on location in refineries. Now that oil prices are at a historically low level, tank storage companies are reaping the benefits, because trading companies are keen to store large quantities of oil in the hope of rising prices. With the fluctuating market, the question of when and how fast oil is traded and therefore has to be transited is always exciting. In addition, a reliable and fast system for transporting the oil is not easy to achieve.

One of the companies where refined oil is stored, Koole Terminals, appears to have anticipated these developments at just the right moment by automating its terminals with the help of DWG Automation. PROFIBUS plays an important role in ‘flexibilizing’ the terminal.

DWG Automation was founded a year ago, when several men with years’ of experience in industrial automation decided to start for themselves. Their main client, Koole, provided DWG with working space at its terminal, with even a view over the River Maas – a top location. For a client like that, you're willing to go the extra mile. To begin with, the terminal that Koole had traditionally managed in Rotterdam, for the transhipment of vegetable oils, was automated by staff from DWG. On the strength of that collaboration, a newly acquired terminal has now been tackled. In these tanks, heavy fuel and gas oils were stored, transported and blended to create the appropriate end product, depending on demand at that moment. As the crow flies, the terminal is situated a stone's throw from the other terminal, but to get there you have to go around the Shell refinery. And that just happens to be the largest oil refinery in Europe, where they prefer to store their oil in the immediate vicinity.

The fuel oil terminal has had various different owners over the years, until it came into Koole’s hands in February 2014. The oil was transported to and from the terminal via an outdated system of pipes. “In a manner of speaking, the staff could press a button, go and get a coffee and then look to see if the system had reacted. The people who work there were used to the slowness. But Koole realized from their experience with the terminals for vegetable oils that a significant improvement was possible. Slowness has all sorts of drawbacks: it is economically disadvantageous and it can mean that faults in the system are overlooked, because faults and slowness are confused with each other.” 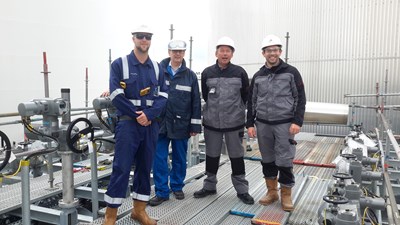 Speaking is Maarten van Dijk, sales manager at DWG. So an entire new system, commissioned by Koole, was designed and installed. Kelvin Hooft van Huysduynen, who worked as DWG software engineer on the development of the design for the new system, knows exactly what improvements have been made: “What used to take roughly fifteen seconds reaction time between the control room and the field, now takes only one or two seconds. In the setpoint percentages, there is in real time one, or at most two, percent difference between the control system and the field. The PROFIBUS loops themselves have a scan time of 3 seconds, which is more than sufficient for slow systems.”

In the percentages, there is in real time one, or at most two, percent difference between the control system and the field. This really is an immense difference from the previous situation.” These numbers even surprised Van Dijk and Theo Bervoets from AUMA, supplier of the pipe valves and the third person present during the conversation. The improvement can be found in particular in the new manifold system, for which DWG designed the electrotechnical design, the software and the control automation.

The key element in the flexibilization process is therefore the manifold: a matrix-type substation, where in principle every pipe can be switched over to another. The manifold has become a single central place for all the valves and flow meters in the pipes. With the aid of PROFIBUS, the manifold communicates with the PLC, which is in turn managed from the control room via Ethernet.

Software engineer Kelvin Hooft van Huysduynen explains how the system works. “The CPU410H is a dedicated PCS7 PLC with integrated SCADA and Safety functionality, which organizes the control of various machines and devices such as the AUMA valves. The PLC is connected by Ethernet to the terminal network via a Scalance switch. That means that we can look at everything from the engineering station and the clients, and make changes to the controller software when necessary. The SCADA (PCS7) servers are also connected to the PLC via this network. For the visualization of the PROFIBUS network and its regulation and monitoring, we have chosen a ComBricks with scope functionality and webserver from PROCENTEC.

On this diagram you can see that the ComBricks is connected to the PLC by means of PROFIBUS. From the PLC, PROFIBUS joins the main station of the ComBricks and is then connected to a number of PROFIBUS repeater cards. Each card controls a single PROFIBUS loop, each with a number of participants. In the main station there is also an Ethernet connection and this leads to the Scalance switch as well. That allows us to monitor the loops and cards remotely. There is a great deal possible with these cards.

This is how ComBricks checks the PROFIBUS. Other advantages are that the system can be built up in a very modular way and that you can arrange all the loops into groups and keep them under control. There is room for adding or enlarging loops (more participants per loop). The PROFIBUS goes from the card to an overvoltage protection module. The loop then leaves the cabinet and goes to the field, where it encounters a number of PROFIBUS participants, such as a valve or a flow meter. The components themselves do not interrupt the loop. Each PROFIBUS connector has its own terminating resistor. Normally the last participant is closed off, but if that happens to be the participant that fails, the entire loop is no longer visible. That is counterbalanced by an active terminating resistor in the PLC cabinet, which shuts off the loop for all the participants. If a random participant drops out, that has no effect on the other participants.

ComBricks is connected via a fiber optic ring to another location (Jetty 10) where PROFIBUS participants can also be included and viewed remotely. The engineering station makes use of our Siemens PCS7 software, which we have used to program and configure everything. We can download everything we build to the PLCs and servers and observe live what is happening on the PLCs.

Read the article in PDF