Successful launch of Atlas at the Hannover Messe

From April 24th until April 28th, PROCENTEC participated at the Hannover Messe trade fair in Germany. This is the world's leading trade fair for Factory and Process Automation, Systems Solutions and Industrial IT. PROCENTEC’s experts were available at both the PROCENTEC and the PI booth in Hall 9.

Lots of visitors found their way to the PROCENTEC booth easily. Not only for the new Atlas solution, but also to grab a Dutch stroopwafel, which quickly became a very popular snack in Hannover. Also, many people moved around at the fair with an ‘I Love Atlas’-button, to create extra awareness for the vision on Industrial Ethernet diagnostics. 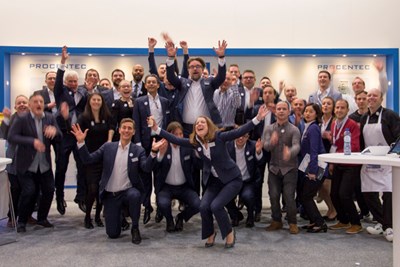 On Tuesday April 25th, PROCENTEC successfully launched their new Atlas tool. A large crowd visited PROCENTEC’s booth for the official moment and to drink a glass of champagne with the PROCENTEC crew. During the presentation, Managing Director Pieter Barendrecht looked back at 20 years of PROCENTEC’s existence. Product Manager Oscar Abbenhuis led the visitors through the development process and Global Sales Manager Matt Dulcey talked about Atlas’s added value.

Two days later, the full PROCENTEC crew went to the fair wearing orange because of Kingsday. CTO Paulo Silva gave his presentation in the orange Dutch tradition about Industrial Edge technology, overcoming the data overload and new applications at the Holland High Tech House. A full crowd hung on his every word and asked interesting questions afterwards.

PROCENTEC looks back at a successful Hannover Messe and wants to thank everyone who joined them at the fair.