Each year in June, thousands of people from The Netherlands set out to the French Alps and climb the famous Alpe d’Huez mountain by bike. Doing so, the contestants try to raise as much money as possible to support the Dutch Cancer Society. For many of them, this is a yearly recurring event. One of those contestants is Cees van de Noort of Dunea. This year, he climbed the mountain for the seventh year in a row. As Cees has a special place in his heart for PROCENTEC from the very beginning, we found it a good idea to support him in the battle against cancer and his path to the top.

“For me, it all started back in 2011, when Dunea participated at the Alpe d’HuZes with its own cycling team. I was there as a companion to support my colleagues. During those days I got in touch with the organization of the Alpe d’HuZes. Since then I’ve been volunteering every year.”

In his position, Cees supports participants with the receiving and attaching of their registration chips and he assists them with their journey to the mountain on the big day. On the other days, he conquers the mountain twice a day himself. “Conditionally it is a very difficult trip. If you don’t train for this by cycling long distances regularly, you will get in trouble easily.” 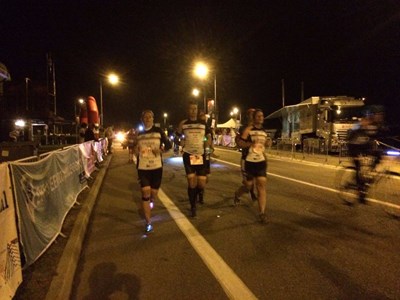 He is very happy that PROCENTEC backed him on his journey uphill. Cees has been familiar with PROCENTEC since its founding in 1997 and only has positive experiences with the innovative solutions and support it offers. “It is so cool that PROCENTEC gave a substantial donation. Thanks to this sponsoring, the trip was simple as A-B-C. But it’s not about me obviously. The money benefits research for the battle against cancer.” A battle he hammered himself before. “When I got back from the Alpe d’HuZes in 2012, doctors discovered skin cancer. I had to be treated for it and they declared me cured afterwards.”

The participants of Alpe d’HuZes raised over 10 million euro this year.