Network audit on one of the longest networks in the Netherlands

A tunnel is actually a large cabinet you build around an installation. That is certainly true of the extension of the A4 motorway between Delft and Schiedam; the route has been there for years and the tunnel was built over it.

Last December I worked as a support employee in the PROCENTEC test team carrying out the network audit on this very special network. The stretch of motorway is actually 7 km long: 1 km at ground level, 2.6 km half-sunken, 1.4 km sunken and a land tunnel extending for 2 km. This resulted in an incredibly long PROFIBUS network where we had no less than 190 segments to check.

This motorway, with its tunnel section, is open to the public now. For the average car driver this might be perfectly normal: for years you see a sign alongside the road saying ‘a new section of motorway with a tunnel is being constructed here’, and after a few years there it is: the most natural thing in the world. A tunnel is just something that lets you drive from A to B. However, nothing could be further from the truth. Each car becomes part of a stream of traffic that has to be monitored, so that it stays safe for everyone. You need all sorts of things to make that possible, such as lighting, emergency exits, emergency exit lighting, ventilation, matrix displays, traffic lights, cameras and fire extinguishing systems. These are over 50 systems in total that have to work together. Plus the most important of all: a network that controls everything, in this case a PROFIBUS network. A tunnel cannot function and therefore cannot be taken into use before this essential component has been tested and found to be performing well. 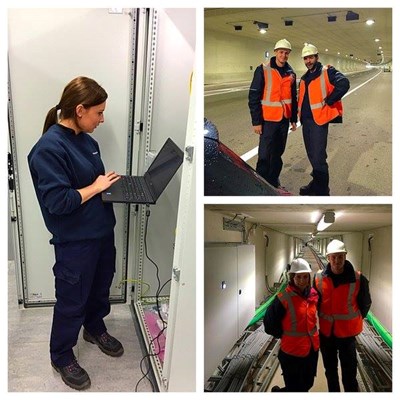 Off we go then. Overalls on, extra thick sweater, safety helmet, safety shoes, safety vest, the blue PROCENTEC case and a personalised access pass. Nothing is left to chance. It feels strange to drive on a deserted motorway, where soon 128,000 cars per day will be driving. At the moment it’s still like an empty new motorway. Until the first door opens into an enormous space in the roof of the tunnel, that is. It completely changes the perspective: space after space, long corridors, even more doors, adjacent buildings and local control centres with people sitting at dashboards. A complete system whose existence you might suspect, but on a scale you only really become aware of once you walk there yourself.

It smells new and the road sounds fade away when doors close behind us. New doors can only be opened with our special passes. We have a map with an overview of the new tunnel world we find ourselves in. I hope this never becomes familiar; it’s too special an experience. We know exactly where we need to be and where the cabinets are located where we can measure the network, thanks to our detailed, digital network drawing. If it were printed out, the drawing would be as the size of an A0 billboard poster. The scale is impressive.
This job is going to keep us busy for several days! The network is split up into various segments that can be controlled easily and we’re testing them all, beginning with this first cabinet. We open up our blue PROCENTEC case. The ProfiTrace is in there: our monitoring tool that immediately starts measuring the first segment. The initial results appear on the laptop screen in the form of traffic lights. Will everything be fine? ... Yes! The light turns green and the first positive test result is a fact. Another 189 segments to go. Besides the fact that it’s an exceptionally long network, the audit also consists of four parts:

After three long days of testing, making reports, analyzing them and turning them into an audit report, we are able to make the people from this A4 project happy with a thorough report containing a few recommendations, but nothing to prevent opening the tunnel. If they require the knowledge and experience of PROCENTEC in the days, weeks, months and years ahead, we are close at hand and can continue to provide support with our specialist products and services. With our help, they can rely on the stability of their network for years to come.

I get into my car and drive in the direction of home. From now on I’ll be going through the new tunnel, or actually, past the network with a tunnel around it. Despite the fact that one of the objectives of the A4 project was to make this stretch of the motorway as invisible as possible, I’m pleased I’ve been able to see it up close and from the inside. On to the next audit!

Am I perhaps on my way to an audit at your company?

How robust is your network? Ask PROCENTEC for a free network check now. We test the broad outline of your industrial network by carrying out the first step of a network check – a visual inspection – and provide you with an indication of the risks your network is currently running and tell you what you could expect from the protocol measurements and the electrical measurements.